Hammertoe is a foot condition, where the toes contract and bend upwards and downwards instead of being straight. Hammertoes can worsen with time and extreme cases can be treated only through surgery. If the bend is flexible, the condition is in the early stages and non-surgical solutions may be applied for treatment. In case of the bend or the curl being rigid, it usually refers to a more severe condition of hammertoes. 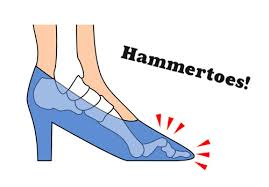 In case your toe has an unnatural bend and this leads to pain or discomfort, please contact CuraFoot Clinic for an appointment.

Hammertoes occur because of a lack of balance in the toe muscles, which in turn creates stress on the tendons and joints of the toes. The muscles and the tendons contract because of this stress and this leads to the curving of the toes.

The unnatural bending of the toes can increase friction at the toe edges, which can result in corns, calluses or blisters. The constant friction can also result in pain.

There are a few known causes which can result in the development of hammertoes:

Hammertoes, if left untreated, can lead to more serious complications. This is absolutely true in case of people suffering from neuro-muscular ailments as they increase complications.

For example, hammertoes are especially risky in people who suffer from diabetes, since hammertoes can very easily cause sores that do not heal easily. In diabetics, this can specifically lead to the wound getting infected and the possible formation of gangrene in extreme cases.

The following are common symptoms of hammertoe:

It is recommended for you to consult a foot specialist instantly in case you suffer from hammertoes to rule out risks and mitigate the condition from deteriorating. The doctor may suggest X-Ray to be done to confirm the condition. 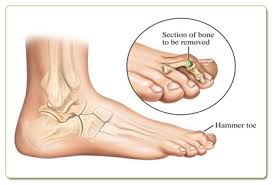 In case of mild to moderate hammertoes, the following can be tried as forms of treatment to minimize the pain and reduce discomfort:

In case of severe hammertoe condition, the doctor may recommend surgery. The decision for the same is often dependent on age, the level of deformity and other ailments that you may suffer from. The recovery time also varies depending on similar factors.