Verrucae, also known as plantar warts, are a viral infection at the base of the foot, or in the toes. The virus may be contracted from a previously infected person, or from sharing an environment such as common bathrooms, changing rooms, swimming pools or locker rooms of the gym. Verrucae can also occur on skin that has a sore or a wound previously. 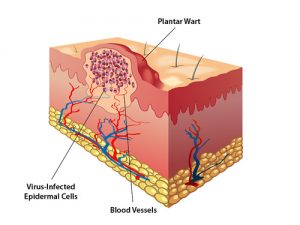 Verrucae are usually harmless to health, but can cause pain while walking. Continued pressure on the plantar wart can also cause back, hip or leg pain. People with compromised immunity are susceptible to the contraction of verrucae. Formation of verrucae is also risky in diabetics. If you are worried about verrucae infection, please contact CuraFoot Clinic for an appointment.

Verrucae can often be mistaken as corns since these also look like black dots that are painful. The primary difference between corns and plantar warts is the absence of skin striations in the latter. For corns, the striated skin is visible on the area which is not there for verrucae.

Verrucae is contagious and can occur if you share the same area with an infected person. To prevent verrucae formation, it is best to avoid the skin from touching the floor in areas such as changing rooms. In addition, it is best to not share socks and shoes with anyone, since that can spread the virus. In case you are using shared locations, use a disinfectant to clean your feet at the earliest to mitigate the chances of infection.

Children are usually more prone to the contraction of plantar warts, and it is best to maintain hygiene by keeping separate towels and not being bare feet in public areas.

There are a few Over–The–Counter (OTC) creams or plasters that doctors can recommend as a treatment for verrucae. Based on the diagnosis and the doctor’s recommendations, the following modes of treatment can be adapted to treat verrucae:

In case a person with diabetes contracts warts, it is better to consult a foot specialist immediately, since a foot infection or a sore can develop into further complications for diabetics.